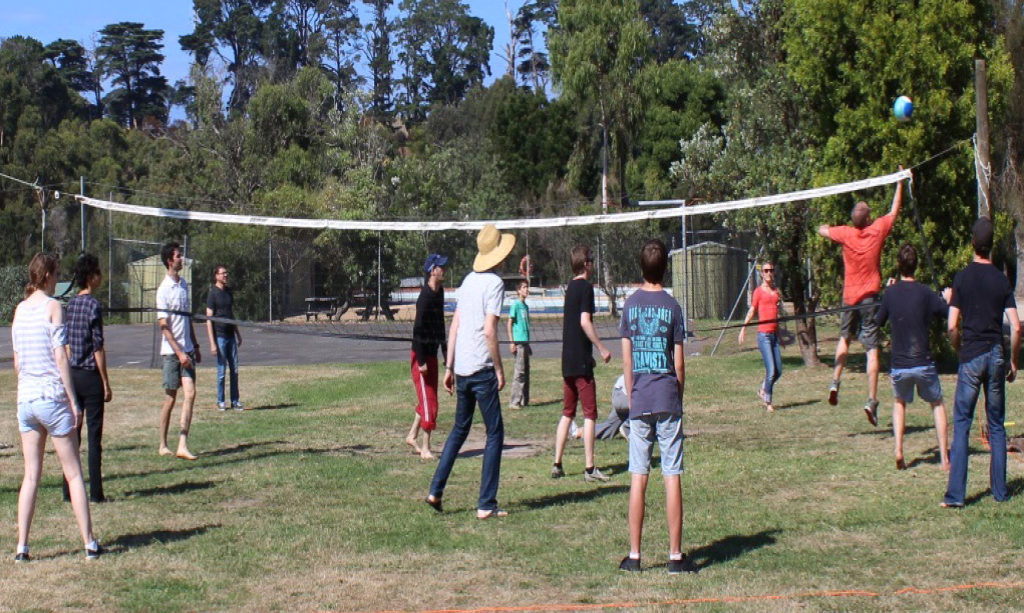 Several decades ago, sport and the church existed side-by-side within many local communities. In fact, in many places, local churches took an active role in developing sporting activities or collaborating with local sporting clubs. Many churches entered sporting clubs in local cricket or netball competitions. In some instances a league or an association was formed to cater for church clubs which had numerous young people ready and willing to participate. For example, a junior football league was formed more than 50 years ago in the eastern suburbs of Melbourne to allow children from local Catholic primary schools the opportunity to compete against each other on a Saturday morning, leaving Sundays free for church and family commitments. In many places, tennis courts were constructed on the same property when a new church was built, then subsequently a tennis club formed.

Sport and Church in Tension
Community expectations, even of those who had no interest in church or religion, saw Saturday as the day for playing sport while Sunday was the day for church, rest and family.

But society has changed. Sunday is no longer reserved for church, rest and family. Most sporting venues are used all weekend. Arguably, within the last generation sport has encroached more and more into the time-space of local church, although how much effect, if any, it has actually had on church attendance is contentious (Powell, 2002). Many young families involved in local churches are all too aware of the tensions between Sunday morning worship services and Sunday morning sporting activities.

However, there are some churches which have recognised the potential of sport to connect with people in the local community. A number of churches have built multi-purpose sporting facilities, which transform to worship centres as needed on a Sunday. Many churches regularly field teams in social or organised sporting competitions. It is not uncommon for churches to have occasional community events organised around sport. Sports Chaplains are active from grass-roots to elite level sport. (For an exploration of Sports Chaplaincy, see the Christian Research Association’s ‘The Values and Benefits of Sports Chaplaincy In Australia’, Research Paper No. 13, 2013). The following are some creative ways in which churches are connecting with people and reaching out to the community through sport.

Creative Connections between Church and Sport
Basketball for underprivileged Lighthouse Church in Wollongong has a number of activities using sport to link with the local community, such as a charity cycling event and regular walking groups. One of the Senior Leaders is also Chaplain to the Wollongong Hawks Basketball team, the local team in the National Basketball League. Until recently, the church rented a corporate box for Hawks home games, which was used, not for corporate high-flyers, but for local underprivileged people. While the church no longer rents the box, it continues to pay for some local residents in their youth housing to attend games, and church members regularly assist as volunteers at these events.

Church Sponsorship
The Uniting Church of Donald and St Arnaud, situated in rural north-west Victoria, sponsors the local footy teams. The Uniting Church logo can be seen on players jumpers as well as on club and league websites.

SALT
The Dural Baptist Church operates a sports and leisure centre in the Hills District of Sydney. As part of the church’s mission focus it runs Sport and Leadership Training (‘SALT’) to ‘use the vehicle of sport to build community and then to impact that community in a powerful way that sees lives changed physically, relationally, emotionally and spiritually’.

The God Bowl
Citipointe Church in Brisbane includes a skateboarding facility, known as the ‘God Bowl’. It is home to the Redfrogs Boardriders crew, a group of skateboarders from the church and associated with Redfrogs Australia, a support program for young people founded in 1997 by a youth pastor from Citipointe. The God Bowl is even rated on a popular skateboard website, with the warning that ‘it is located in a Christian Centre so you will have to behave to skate’ (www.skateboard.com.au).

State Youth Games
State Youth Games is a weekend of sports and activities for young people organised by Youth Vision, the youth ministry arm of the Churches of Christ in Australia, although young people from other denominations also participate. Held annually in Victoria, Queensland, South Australia and Western Australia, State Youth Games aims to positively impact youth through sports and the development of healthy relationships. Young people participate in various sports during the day, and the evening involves a concert or similar event with a Christian focus.

Sport & Spirituality in Schools
In New South Wales, three Catholic school teachers recognised the link between sport and spirituality and decided to connect the two through the curriculum. The idea was to use the ‘sport’ component of the program to get children active while the ‘spirituality’ aspect was designed to show children that religion and involvement in parish life was not something to be compartmentalised, but something to be integrated into all aspects of one’s life. The program is now being run in three Catholic primary schools in the Newcastle region.

Other churches throughout Australia conduct less formal, occasional sporting activities which aim to connect regular attenders with people in the community. For example, instead of a worship service one Sunday morning, New Community Church in Ringwood organised a social soccer tournament with members of a Melbourne Iranian community. The event aimed to engage church members and those of a local ethnic community in a common interest – soccer.

Some churches organise events to both connect with the community and to raise funds for their ministries. One such event is the Victorian Baptist Fun Run (organised by Kilsyth South Baptist Church), which has been listed on Australian fun-running calendars annually since 1991.

It is common for churches to have walking groups, or other exercise groups, such as recreational cycling events. These groups allow attenders and non-attenders the opportunity to get involved in a less vigorous but healthy activity, while offering a real social aspect.

If one undertakes a quick survey of a local sporting league (tennis, netball and football associations are good examples), one will notice that many churches continue to enter teams under their name. However, the strength of any links between the local church and the club which bears its name is often dependent upon the church attenders who are active in the clubs, rather than any intentional ministry focus from the church itself.

However, as the age profile of many congregations gets older, or its parishioners no longer have the energy or interest to commit to the church-named sporting club, churches have redirected their resources toward other areas of ministry. For example, tennis courts have been ‘sold-off’ to raise funds for other church endeavours (or simply to allow the church to remain open).

Involvement of the Population in Sport and Physical Activities
The 2007 Australian Survey of Social Attitudes asked Australians about their leisure time and sport involvement (ASSA, 2007).The survey revealed that many Australians aged 18 and over were involved in physical activities, such as sports, gym or walking on a regular basis:
• 21% daily
• 33% several times a week
• 22% several times a month
• 13% several times a year or less often,
• 7% never involved, with
• 5% not responding to the question.

According to the survey, among Australian adults,
• 34% were regularly involved in walking or climbing,
• 10% in fitness activities such as aerobics and machine-based exercises,
• 4% in golf
• 3% in swimming
• 3% in cycling
• 2% in jogging
• 2% in bowling, and
• 2% in tennis.
Around 1 per cent of Australian adults were involved in each of the following: football, soccer, netball, body-training (including gymnastics), and dancing.

Not surprisingly, younger people aged 15 to 29 were most active (63%), although those aged 55 and over were active more regularly than those aged 30 to 54.

Over recent decades, sport has also diversified in Australia. Once children had access to a limited number of traditional sports, such as netball or tennis for the girls, and cricket or football for the boys. Today young people have a plethora of team and individual sports to choose from, and many children participate in a number of different sports. Some sports which were traditionally male or female activities have now become inclusive of both sexes. An example of this is the recent increase in the number of girls playing soccer – from 54,800 in 2003 to 87,800 in 2012, a 60 per cent increase in nine years (ABS 2012, p.21). The increased diversity in sporting activities has made it more difficult for local churches to put together sporting teams in a particular sport.

Involvement of Church Attenders in Sport and Physical Activities
Church attenders are, in fact, more involved in sport and physical activities than those who never attend a church. While the difference is not great, it is statistically significant.

Examining the data for different age groups, one finds that among younger people aged between 18 and 29, there is no difference at all in the engagement in sport between those who attend a church frequently and those who never attend. However, the difference becomes apparent among older age groups. Among those aged between 30 and 54, 57 per cent of church attenders are active in sport and physical activities compared with 50 per cent of those who never attend. People aged 55 and over are a little more active in such activities (59% of church attenders compared with 55% of non-attenders).

Walking, tennis, bowling and swimming are all popular activities among church-attenders and in which greater proportions of church attenders participate than do non-attenders. On the other hand, non-attenders are found more frequently at the gym, jogging, cycling, playing golf and dancing.

Conclusions
For many Australians sport plays an important role in life. Whilst there are multiple influences and values that contribute, just over one in five adults affirm that the sporting club they play for or support is a very important part of who they are (Hughes and Fraser, pp.107-108). People find their sense of community through sport. Apart from those who participate in sporting and other physical activities, 2.3 million Australian adults volunteer in sport or physical recreation organisations, as coaches, club administrators and in other roles, according to the Australian Bureau of Statistics (2011). It can be a source of identity for them, even if they are just spectators. The competitions become rituals which weave into their life story (Hughes and Fraser, p.63).

In 1964, Donald Horne stated that “for many Australians sport is life and the rest a shadow” (Horne, p.40). Tyndall argues that Australians also live under the shadow of the steeple and that the influence of sport has diminished that shadow (Tyndall p.iv). However, some churches have asked the question: instead of being in competition with sport, why not be in partnership ? If churches took a holistic perspective of wellbeing, physical, mental and spiritual, then physical activities should be seen as contributing to that wellbeing. In a partnership between churches and sport, it is important for churches to recognise that their endeavours should not be about serving the community through sport in the hope of building up the church membership base, although that may happen. Rather, it is about churches connecting with the local community in a way which is relevant, with no strings attached, and which provides an alternative form of community which is complementary, hopeful, and just as meaningful.

This articles was first published in Pointers: the Quarterly Bulletin of the Christian Research Assocation, Vol. 24, no.2, June, 2014. pp. 1-4.